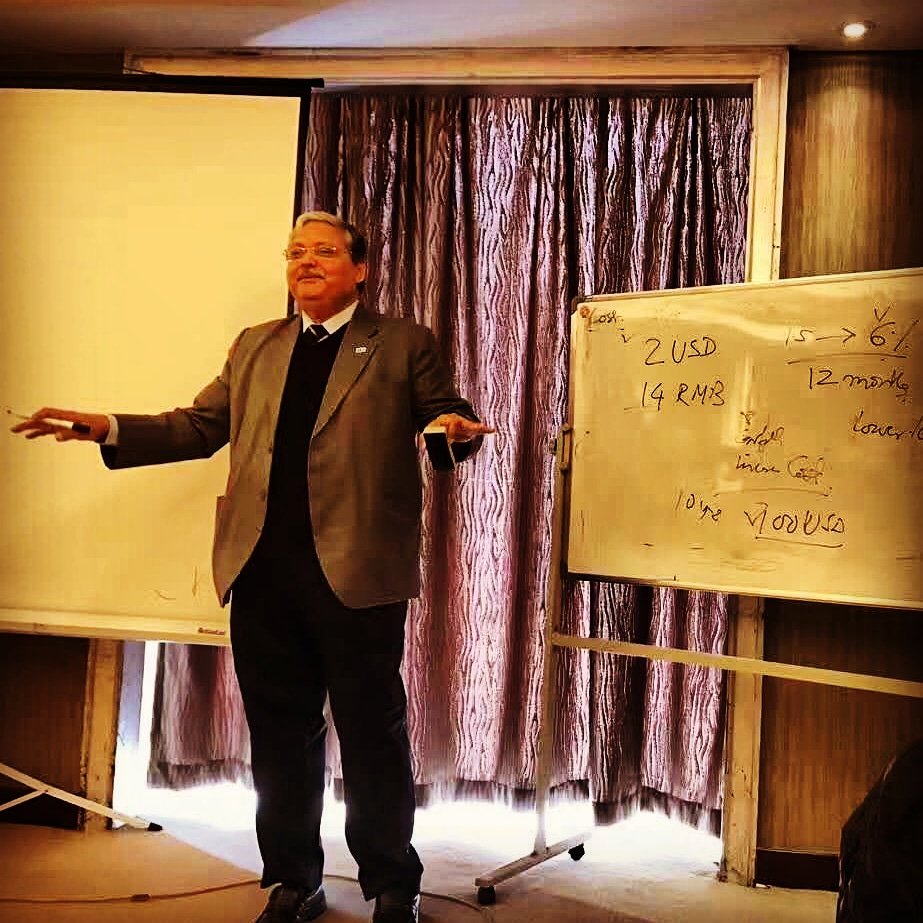 One fine Sunday morning back in 1973, someone asked me “Will you join tea?” – I almost fell down from a tree as I didn’t know where tea is grown and rather I was furious at the thought because I thought I was educated enough not to work in a tea shop ♥️🤭🦆🌹

I was in no mood to serve on a way side shop which was selling tea to passengers, bus and truck drivers or rickshaw pullers and the boys employed there didn’t need any skills to do their job of carrying glasses of hot tea to them and then collecting back money and empty glasses. But it took one full year to realise that the job I was offered was growing tea and the picture above shows the glowing face of a young 20 year lad who was really happy to be the one who took the risk and said “Yes” to the proposal.

The job took me to places and Darjeeling intrigued and atrracted me as the people living there were so simple and ever smiling. The language they spoke – Nepali – was so similar to my mother tongue and very easy to learn. It just took me one month to master it and it came out of my heart. I fell in love with these people and lived in the hills for 15 long years till 1991 and had many achievements of making good world famous Darjeeling tea.

I never looked back since that day and ended up winning a laurel in Japan in 2016 for making a tea which was our destiny and is sweet as chocolate and smelling of Darjeeling in the cup – Doke Black Fusion and Diamond Green – my daughter helped me shape it up. Bihar invited us to plant tea and we seized the opportunity to do many good things on the banks of a small river, Doke, flowing through our tea farm.

It is a long story to tell and will test the patience and interest of the audience to wind through the unwinding tale which passes through many places, lands and people. Vimla and Dolly helped set up Doke and make teas there which is also a tea story in itself. Rings within rings Vimla and Nirmal joined us in 1998 to complete the jobs on hand and are going strong.

The people who went into it and then worked on to complete it are many and varied – I have to thank them all because without them the story isn’t complete. As the story grew so do the family – after getting married in 1978 to Manisha I got two daughters Mayuri aka Guria and Neha aka Dolly and a son Vivek aka Vicky in 1980, 1985 & 1989 respectively who in turn got married and settled in places while our tea business which coincidentally started in 1998 kept on growing.

It is the story which sells, and stories I made and sold – be it Darjeeling or Doke. My team makes me convert these stories into realities and my son sells it. Stars in the eyes and springs in the toes the family kept growing and an unbounding energy flows from up far north in Norway. It is said that history repeats and I see the twinkle in the eyes of Tor, my grandson, which must have shone in mine 60 years ago.

My journey didn’t stop at south or north India – it went on to China & Japan – and that made difference to our lives and that resulted in getting many awards there too – biggest being the Golden Globe in 2017 in Enshi, China during the International Tea Forum which were presented to us by celebrated Chinese tea scientist Prof. Liu Zhong Hua of Hunan University.

What I learnt in these days is that we have to care for a tea bush and the person who takes such care and rest everything gets solved on itself. Tea is a health drink and an important food supplement and has to be carefully chosen for oneself out of thousands of types available in the market.

While one story ends another begins and it happened with me too – after staring on Chinese character for a long 15 years I realised I had adopted a 26 characters English alphabet substitutes for writing my secret diary in class 12 which made me familiar with some of the simpler forms like 日 which stands for sun but for me it was “A”. However this amused me in 2004 when I was a completely open eyed blind on Beijing airport when I first landed there and I promised to myself that in one year I will master this language although that year is still unfinished and I can stammer few incoherent sounds in Chinese which are highly praised by my friends.

の was another easy character to adopt from Japanese and now I study these three languages deeply – Chinese, Japanese & Korean. My last love, maybe, but not the least. Xiao Juan, my Chinese friend, and Chitose San, my Japanese partner, help me learn these languages.

A tea diplomacy dialogue was started with some tea culture professors and industry professionals – from India to China to America – first being at world famous Delhi Book Fair in 2015 with Prof. Wang Xufeng of Zhejiang University. Later we moved to America to have it with Prof. Yan Chen of Louisiana University at World Tea Expo in 2017.

Robert Fortune, the tea thieve, became my role model – the man who brought tea from China to India in 1830s – and later I perfected the story by taking the tea back to China by introducing Milk tea there ..

Mission of my life is to spred the message of tea – which gave me so much in life to enjoy an eventful innings. That fateful day proved that tea is a bond which allowed me to settle the lives of many around me inclusive of mine.

I was literally born in tea in 1953 as my maternal grandfather was a doctor in a government hospital located in Herbertpore tea estate near Dehradun and my mother was at her parents’ home as the traditions called for in those days – later I grew up in Atrauli where my father taught physics in a local college. I got my higher education in Allahabad University and I passed out of 1973 as an organic chemistry masters. China Radio documentary covered my life which was released to coincide with Xi Jinping’s recent visit to India.

Complete works of Swami Vivekananda – a set of eight volumes – was to become my beacon of light to shape my formative years in Allahabad University from where my father and my uncle also got educated earlier and Sir Sunderlal – SSL as it is fondly called – hostel become my refuge where I stayed for four years to complete my higher education. This was an important time in my life and I met right people who set my story to envelop my working later in the days to come.

Another diary was born out of the secret diary I kept in my invented codes using Chinese alphabets meaning of which was not known to me at that time but it wrote a story which lingers in my mind. It is said one should forget the past but the memories can’t be rubbed out of a human mind. Sugar can’t be separated from the water once it is dissolved in it and a forcible separation results in a crust which can’t be called sugar. My family at Chandausi from which I took my rise in 1954, traded in sugar from which I changed to tea in my later years starting 1974.

Today it is my rebirth of the character called Robert Fortune and I am happy to be what I am – selling tea – the flower which changed the history of human being.

Tea has a timeline history of its own which is so deep that it is really not known where and how tea started and first ever known evidence is a fossilized tea seed dating back to 35 million years – this makes tea to supersede any living or dead human or civilization or religion – thus making inroads to have a tea culture of its own. Many attempts have been made to document it and best one is “Journey of a tea leaf” by Prof. Wang Xufeng of Zhejiang University in Hangzhou. She was awarded the highest Chinese literary Maodun award for this work.

As civilizations progressed and agriculture improved different religious thoughts also formed superseding one over another from time to time – Taoism to Buddhism to Confucius – and in their wake different forms of tea cultures developed – let’s study them and form our own to propagate the healthier teas to be part of our life and food. This went to the point of tea becoming a bond – between different regions and cultures.

What will help us evolve a tea culture for ourselves – tea, masala, pottery, ware, water and a beautiful face 😋 – music, place, literature and ambience. Let’s look out for that – we have a Darjeeling and an Assam – our signature teas – fit and unfit for milk tea – our strength in the world of tea – so let’s begin with masala chai and start setting up the arena to complete the picture.

AVPA 2020 silver award for Doke Black Fusion was my biggest honour as establishing a new tea is a lifetime achievement for a farmer. It took us ten years to come out of the land grabbing accident which were covered by the money earned by this tea.