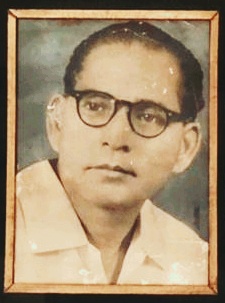 My maternal grandfather Dr. Sridhar Gurudayalji Vatsalya was born in 1903 and he passed as a medical doctor in 1929 from National Medical College, Bombay and was invited to join WW2 in 1942.

It was not normal for a boy who hailed from a backward Raja ka Rampur town of then United Province – his luck was boosted by his widowed child sister who was remarried to Dr. Govind Narain Talwar, a Kashmere pundit, who took him to Bombay to study medicine before he left for London for further studies.

On return from Europe Talwar family settled in Rangoon and my grandfather joined war to face advancing Japanese troops against Chinese forces which were helped by British Indian Land Force.

In 2010 when I was in a K2K, a civilian forum patronized by Governments, delegation to Dehong in China to set up Kolkata to Kunming BCIM car rally route I came across Indian army Ledo road expedition display on Ruili border and Abul Kalam Institute of South Asian Studies Dr. Binoda Mishra & YDRC Prof. Yang Ye explained whole thing to me. I pieced togather everything which my mother has told me.

War ended and British left India leaving Burma separated from India which made Talwar family flee from Rangoon and my grandfather returning from war to settle his family while I grew up to get into tea which I narrate separately.

My grandfather joined disbanded Indian National Congress for independence struggle in 1919 and later Jai Prakash Narayan’s movements in 1954 and Vinoba Bhave’s Bhoodan in 1974 to set Indian society on nationalistic path.

He wrote about me that I grew up fast and completed my post graduation from Allahabad University by the time I was 20 and due to underage I couldn’t appear for competitive exams so joined tea industry and went on to make a career there. He wrote on and on and I have taken upon me to post everything – it seems he was very proud of my mother who was the eldest among his seven children – five daughter & two sons.

Out of them all seven siblings most stylish and diplomatic was second daughter Vimla who settled in Rampur and the story of Raja to Nawab is long one.

On this day, March 22, 1984, his age is 47. His wife’s name is Mrs. Aryabala. She is the elder daughter of Mr. Ram Prakash from Aonla (Bareilly) who is graced by everyone’s blessings as everyone is fond of her soft nature. Vinod has two sons and a daughter. Rita, the daughter, is the eldest and we call her Ruby. Sameer is the elder son and fondly goes by the name Bobby. Praveer, fondly called as Vicky, is the younger son. The children are all very gifted and well mannered. Vinod is younger to Kamla by four years.

On this day, March 22, 1984, his age is 45. His wife’s name is Mrs. Pushpa. She is the elder daughter of Mr. Chandra Prakash and hails from Raja Ka Rampur a small town in Uttar Pradesh.
Mr. Chandra Prakash is currently leading his life in a spiritual way while serving as a devotee to the temple gods in Vrindavan. He is very well off. His lineage goes back to Lala Fatehchandra’s home in Raja Ke Rampur. Their home was believed to be the most well off in the family, and so it was popularly known as the “Big Home” in Raja Ka Rampur.

Pramod is younger to Vinod by two years and has two sons, Sanjay and Munna. The middle son, Ajay, had passed away sometime ago after he fell from the third storey.

Farukhabad darwaza is the name of the haveli where I was born and that housed a faction of kampilawale since 1850s who shifted to Chandausi after the infamous plague – my grandfather narrated many names of people from Aonla like Ramasre and Raja ka Rampur like Chandra Prakash Gupta who were instrumental in bringing together my paternal and maternal families – destiny bring me here today selling tea 🍵😀🙏.